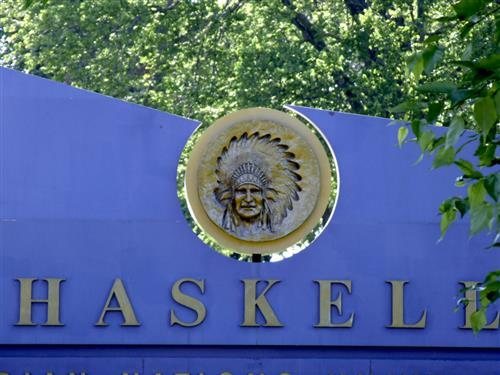 There are a number of locations at this campus that are believed to be haunted. The university was originally an institution dating back to the 1800s, built to help Native Americans assimilate with the mainstream population. The Bell Tower is said to have a mysterious sealed-off wall in its basement where visitors say there's an eerie feeling of being watched while passing it by. At Hiawatha Hall, which is the oldest building on campus, a ghost is known to open and close the doors, even those that are already open with a doorstop. At Haskell Auditorium, there is an apparition that sits in the seats during shows, and a young girl who has been heard crying backstage. A ghostly girl is said to linger in the Pocahontas Hall basement, where she hanged herself. She is known to appear hanging from the ceiling. And ghostly crying has been heard just south of Taminend Hall, at a small cemetery that has the graves of about 70 children who died from smallpox.

Disclaimer: Kansas Haunted Houses does not endorse or support trespassing to visit real haunts. Before you visit ANY local real haunt, make sure to acquire the appropriate permits and/or permissions, and be respectful of privately owned properties. Countless Haunt Hunters have been arrested, ticketed, and reprimanded by the authorities for trespassing. To avoid this, be sure to get in touch with the property owners before visiting a haunt, and respect their hours of operation, local regulations, and rules for visiting at all times. Happy haunting!
All information on this page was submitted to Kansas Haunted Houses and was believed to be accurate at the time it was posted. Please report any inaccuracies here.