Stay In Line, Santa! Why We're Sick of Seeing Christmas Encroach on Halloween 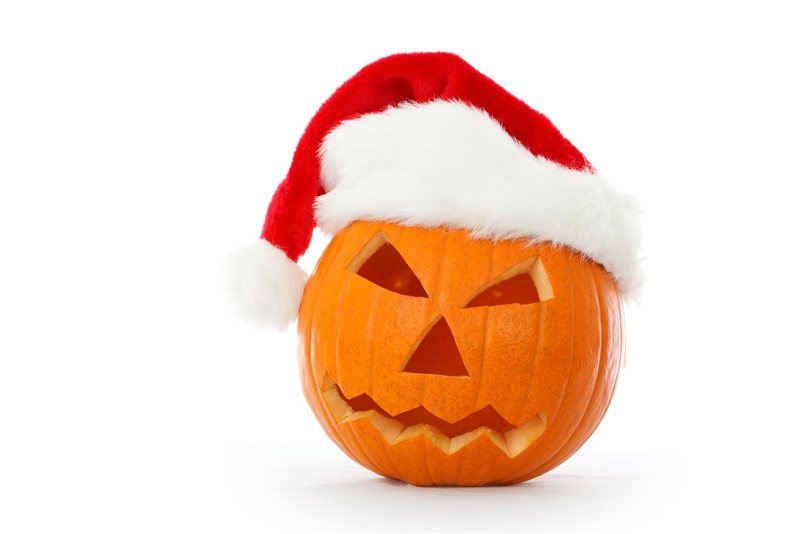 Back Off, Santa! It's Still October
Photo by: Photo via PixaBay.

If you've been out to your local grocery stores or super stores recently, you might have noticed that nestled in the aisle right next to the Halloween candy, costumes, and decor, there's already an aisle for Christmas decorations already. While it's a well-known fact that Christmas is the biggest consumer holiday in the US, Halloween is the second biggest (consumers are estimated to spend over 9.1 BILLION on Halloween this season by the National Retail Federation), and it's fast growing, so for Halloween-lovers across the country, it's mind-boggling to see Christmas cheer mixed in with the Halloween tricks & treats at local retailers.

For years, it's seems as though retailers are slowly but surely moving merchandising for ALL holidays and "special" occasions up earlier and earlier each year, which leaves consumers frustrated and baffled. Each year across the country, there are countless news stories, political cartoons, and social media rants about how retailers are pushing Halloween Candy on us over the Summer, and pushing Christmas on us during the Halloween season, which has us wondering - why?

The phenomena, which is referred to by many as "the holiday creep" (since you know, the holidays are seem to creep up on us faster than ever before), has been seemingly expediting over the years, and we were curious as to WHY we keep seeing Christmas Cheer encroaching on our Halloween Thrills and Chills. According to a study released by the National Retail Federation as part of their "2017 Holiday Playbook" for retailers, 25% of shoppers begin researching holiday purchases such as Christmas gifts and decor in October, and 17% of shoppers actually began their annual Christmas Shopping in October, which we found shocking.


The numbers don't like, so we were wondering - October Christmas Shoppers, who are you, and what motivates you to buy your Christmas gifts, decor, and other festive baubles during the Halloween Season?